I grew up in the small, conservative town of Wilson, North Carolina. This is normally 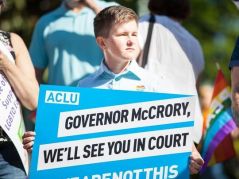 where I ask people whether or not they’ve ever heard of Wilson, and apologize to those who have. The town is no place for a young transgender man in the South. I was bullied because of my identity––assaulted and harassed simply for existing as a trans man in my hometown. I have been pushed around, screamed at, and slapped for being me. I knew I had to “get out of dodge”, and when I graduated high school in 2014, I moved to Greensboro, NC, for college.

Looking back, I regularly ascertain that I began working as an advocate when I was In high school. I noticed that many of the things that my peers would do to elevate their college applications were inaccessible to me and other underprivileged students. School clubs cost $10-$20, marching band fees were $200, theatre was $25 per show. Even school sports had a fee. I would skip school lunches for weeks at a time to pay for these activities or gas for my brother and I to attend school. It was this struggle that prompted me to fight to make these activities more accessible to poor students.

When I began attending UNC-Greensboro, I was double majoring in Trumpet Performance and Music Education. In my high school, the band room was a safe haven for me, and I wanted to create that space for other queer kids in the South as well. Although, I began to move away from teaching music, and towards teaching about equity. It was around this time that I changed my major to Economics to study economic mobility. I wanted to know more about ways I could impact the system that perpetuates generational poverty in rural america and across the world.

It was also around this time that the infamous House Bill 2 (HB2) would come to fruition in the North Carolina General Assembly (NCGA). HB2 was a multifaceted policy that primarily impacted trans people, people of color, and the poor by attacking legal process to file claims of discrimination, over-reaching into local governments ability to raise wages, and limiting the right to use the bathroom. I remember watching HB2 move throughout the NCGA the day that it was passed. I say “the day it was passed” because it was quite literally passed over the course of 12 hours. I remember going out with my friends because I was so anxious about the measure. I remember feeling heat rise in my face when I saw that Governor Pat McCrory signed the bill that night, and I remember posting a picture of myself, asking if I should be forced to go to the women’s restroom.  I’ve never been so angry.

Hearing the news HB2 had been passed into law, I emailed the ACLU of NC and Equality NC. I knew I had to be a part of dismantling hate from the laws of NC. I had no idea that email would lead to me becoming a plaintiff against HB2, an influential lawsuit for trans rights in the South. We are in a time where we must rise up. Our community, communities of color, poor communities are under constant attack. I am excited to be joining the team at More Light. I am excited to learn how to gracefully engage with people of faith across lines of difference. I am excited to be a part of changing hearts while changing laws. I am excited to work with people of faith to build a world that reflects God’s heart. I want to invite you to join me in this excitement.

The work More Light is doing in local congregations, in North Carolina as a response to HB2, and across the country needs your support. Join me in this excitement and give $15, today.