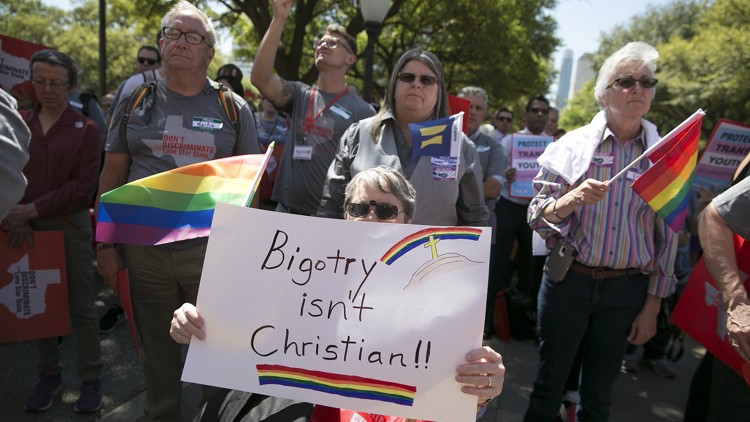 Margaret Lindsey, center, holds up a sign during All In for Equality Advocacy Day at the Capitol in March. From The Austin American Statesman

The Supreme Court is about to decide whether religious freedom is a license to discriminate. This deeply troubles me as both an American and a Christian pastor.
[This post appeared in The Houston Chronicle, USA Today, and The Austin American Statesman, and is re-posted here with permission of the author.]

The high court in December will consider the case of a Colorado business owner who refused to sell a cake to a same-sex couple. In that case, Masterpiece Cakeshop vs. Colorado Civil Rights Commission, the owner has cited his religious beliefs as exempting him from a nondiscrimination law that requires businesses to treat everyone equally.

I and other clergy across Texas are among nearly 1,300 faith leaders who have signed a friend-of-the-court brief arguing that it is wrong to allow businesses to discriminate under the guise of religion. Many signers in this state are part of Texas Believes (TexasBelieves.org), a growing movement of religious leaders who support full equality for lesbian, gay, bisexual and transgender (LGBT) people. Of course, this case could affect far more than just LGBT people. Allowing businesses to pick and choose which laws they will obey would open the door to rolling back discrimination protections for virtually anyone.

Earlier this year, two other faith leaders associated with Texas Believes — a rabbi and an African American minister — wrote about how religion has been used in our history to justify discrimination against people like them. After so much progress — uneven as it has been — to end discrimination against Jews, African Americans and others in this country, this Colorado case could turn back the clock.

Consider the possible consequences if the Supreme Court allows a special right of religious refusal to obey nondiscrimination laws. Some extreme religious sects teach white supremacy and anti-Semitism, for example. Should business owners who hold such religious views be given a pass to post signs proclaiming “Whites Only” and “No Jews” at the shop entrance?

Likewise, would be it be acceptable for a restaurant owner to refuse service to people simply because their religion is different from his? Should a factory owner whose religion teaches that women must not work outside the home be allowed to fire or refuse to hire women who do?

Most Americans would rightly answer no to those questions. That’s because we decided long ago as a nation that those who do business in the public marketplace must treat everyone equally.

That’s an important civic and legal principle in America. But more fundamentally, it’s a moral imperative. Discrimination is simply wrong.

But now some are trying to use religious freedom to justify discrimination against LGBT people. They seek to radically redefine this freedom as the right to hurt people to whom they have personal objections. And they want our courts to embrace this cause.
Yet, the stories of my faith are about radical acceptance and compassion. In them, Jesus reaches out to people who society has marginalized and lovingly brings them back into community. Over and over, we are taught to move from places of narrowness to spaciousness, from exclusion to equality. Simply put, we are taught to love as we have been loved. And so as people of faith, we must challenge these attempts to discriminate against the LGBT community, especially under the guise of freedom of religion, so all of God’s children can be treated equally with respect and dignity.

Of course, Texas does not currently have a statewide law protecting LGBT people from discrimination. But some Texas cities do, including Austin, Dallas, Fort Worth, San Antonio and Plano.

They are among more than 200 cities and 18 states that have already updated their nondiscrimination laws to be LGBT-inclusive. Those laws allow LGBT people to live their lives with less worry that they will be fired from their jobs, evicted from their homes or refused service simply because of who they are or whom they love. But this Supreme Court case puts those protections at risk.

Religious freedom is a fundamental right for all. That’s why we protect it in the Texas and federal constitutions. But protecting people from discrimination threatens no one’s religious freedom. Indeed, treating others as we would like to be treated affirms a central teaching of many religions, including my Christian faith.
As a pastor, I pray that the Supreme Court won’t turn back the clock in this country.

The Rev. Laura Walters is pastor at Presbyterian Church of Lake Travis near Austin.